I do assure you the world needs Durrell

As Sir David Attenborough said on the occasion of Durrell’s 50th anniversary,

“I do assure you, the world needs Durrell.”

Like all small kids I suppose I was fascinated with animals of every stripe but somewhere between ages five and ten, this morphed into a passionate commitment to protect the endangered wildlife of our planet, and Gerald Durrell and his funny, articulate and endlessly informative books became my window into that important world.
And like anything which truly captures my attention, I leapt in boots and all, reading every single one of his engaging books, marvelling at his witty turns of phrase, his brilliance for evoking a scene so vividly that you honestly felt like you were there.
He was a man who, through a childhood spent in places as diverse as London, England, and Corfu, Greece – it was the latter location that allowed him to indulge his nascent love of the natural world under the watchful eye and tutelage of his wonderful mentor of sorts Dr. Theodore Stephanides – grew to appreciate that there was more to nature than simply a place for zoos, circuses and museums to collect specimens, or for adventurous souls to go on holidays.
It was his passion for the natural world that instilled in me the critical need for ensuring that we do everything we can to protect this planet of ours, that reminded me at every turn that every animal, insect and plant was worthy of attention, and that we ignored the threats posed to them at our peril.
He worked hard through the ’50s and ’60s, after an apprenticeship at Whipsnade Zoo as the “Odd Beast Boy”, to advance the idea that all animals, not just the pandas and elephants and such that commanded the lion’s (also popular with the public) share of attention, were increasingly endangered in our rapidly industrialising and urbanising world and that we need to save them all, no matter how appealing they may or may not be.
That’s why, for instance, he lavished as much time and energy on critically-endangered animals like the “Volcano Rabbit” or Teporingo from the mountains of Mexico as he did on the undeniably cute animals of Madagascar such as the Aye Aye and the lemurs (a particular focus of his work in the 1990s) and birds like the Mauritian Kestrel which was saved from extinction in the ’70s through his efforts.

He kept working hard right up until his much-lamented death in 1995 to spread the word about conservation to every corner of the globe. And apart from the large numbers of visitors that thronged to Jersey Zoo and his many TV appearances including as host of How To Shoot an Amateur Naturalist, it was his books, his wonderfully passionate books, that did the most, I think, to spread the word about the mission that happily defined his entire life.

Be sure to check out some of Gerald Durrell’s books and bury yourself in his passion for nature: www.durrell.org/wildlife/product-category/books/ 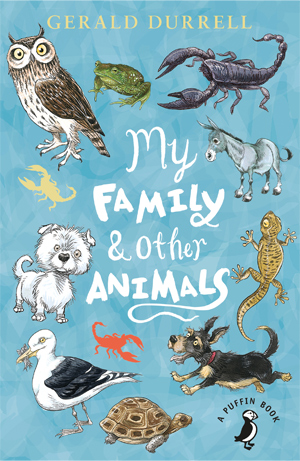 Excerpt kindly shared by Andrew Gillman of Aussiemoose, full article can be read online at www.sparklyprettybriiiight.com/ripd-from-the-pages-of-my-childhood-the-life-changing-books-of-conservationist-gerald-durrell/

We offer cost effective solutions for your company with quality service throughout the surrounding areas and nationally.

We offer national next day delivery on thousands of items across a range of categories.